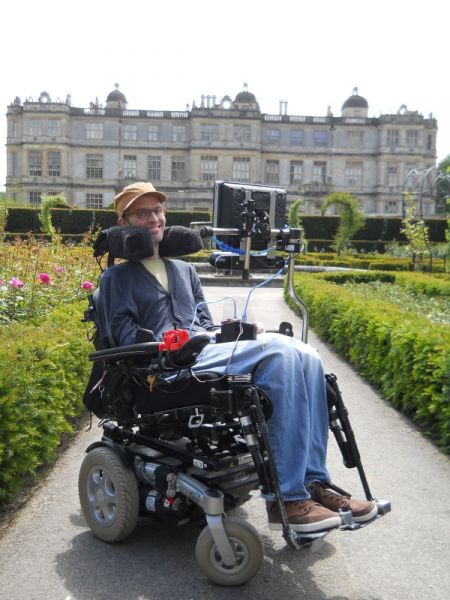 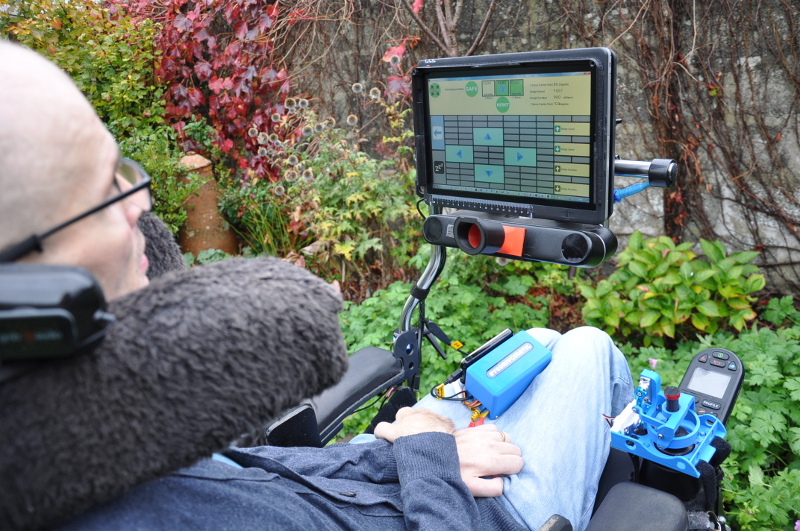 I have motor neuron disease, and can no longer speak, or move my arms. I started using an Alea eyegaze system in early 2015, and now rely on it utterly for communication and typing. When I started to lose the use of my hands, I realised that I would soon become unable to control my electric wheelchair myself.

So I set about designing a system that would allow me to control my wheelchair using eyegaze alone. Developed in collaboration with my friend, and fellow alea user, Steve Evans, the finished system enables paraplegic users to take control of their own mobility – controlling all the functions of their chairs using eye movement alone. The system is called Eyedrivomatic, and is an entirely open project. All the files and software necessary to build your own Eyedrivomatic system, are freely available on the web. 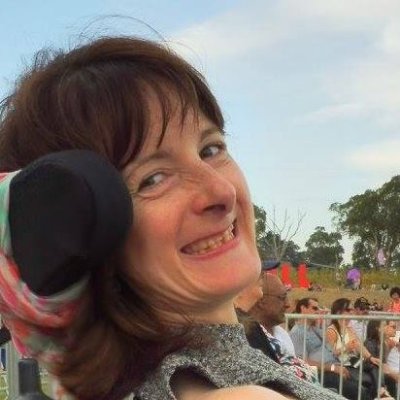 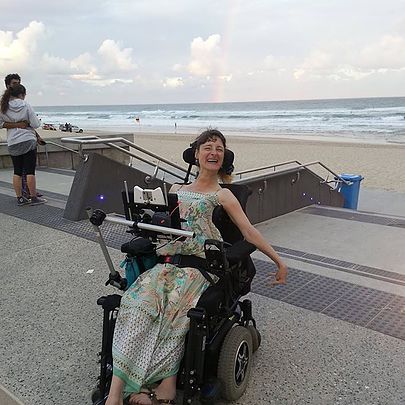 I still feel so lucky to be using an Alea Technologies Intelligaze eyegaze after seven years. Before that for 24 years I used a headswitch which gave me constant headaches and fatigue. In 2010 I launched my independent journalist career and since have interviewed hundreds artists/bands, all thanks to this marvellous equipment. Three years ago my family and friends begged me to start fundraising for a portable eyegaze system because I was suffering so much from using my then headswitch with a scanning program. Last year when all the stars aligned and Grid2 decided to play nicely on a Microsoft Surface Pro 2, the feeling to be able to speak fast and with no pain and fatigue, was indescribable. Now I can speak to shopkeepers and masseuses myself without my workers having to talk for me. The Alea Technologies team have always been there when issues arose especially when I received my first system, and knowing they’re always keen to assist if an issue persists is peace of mind. 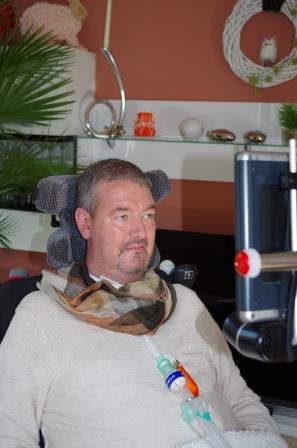 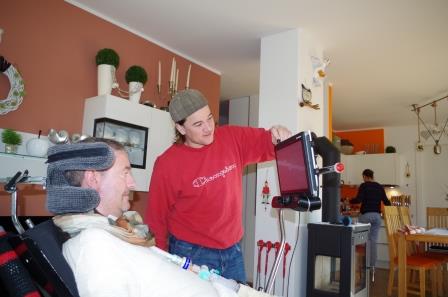 My name is Jan Grabowski and I am using the IntelliGaze eyetracker since 6 years. Meanwhile I do more stuff on my computer with my eyes than many others do with mouse and keyboard. The eyetracker allows me to be very active and have a social life despite my ALS handicap. I enjoy being on tour and have my device always with me to be able to talk in restaurants or when I meet people from my association. The Computer, which was granted by the health insurance 6 years ago, was too slow. Therefore I bought a new, powerful tablet, which I am controlling with the eyetracker. Now I am able to do everything, write emails, prepare talks, schedule  my caretakers, do accounting, be active on Facebook and much more. I am organizing my medical care on my own. I am employing five caretakers, 24/7 since I am on ventilation. Next to my role as employer the work at my association wouldn't be possible without an eyetracker. I maintain the website, write articles, edit photos and plan events. Meanwhile I am the treasurer of the association ALS mobil! In 2015, I organized a workshop where different manufacturers of eyetrackers demostrated their devices. In my opinion, it's very important to trial the devices over time because it takes some time to get used to it. In the first days I worked just one hour per day with the device before I got tired. Meanwhile I am using the device 14h per day. All in all, I am quite happy that the eyetracker works that well and it gives me the opportunity to participate in talks or in internet communities. My life is given a meaning by this device! 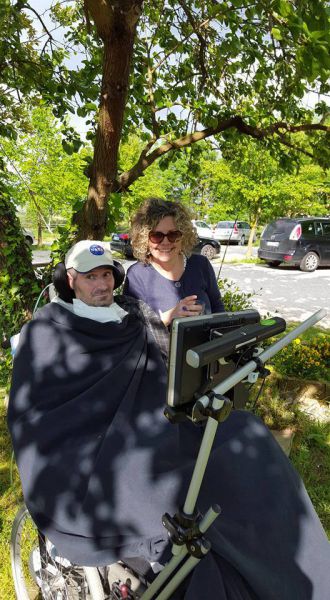 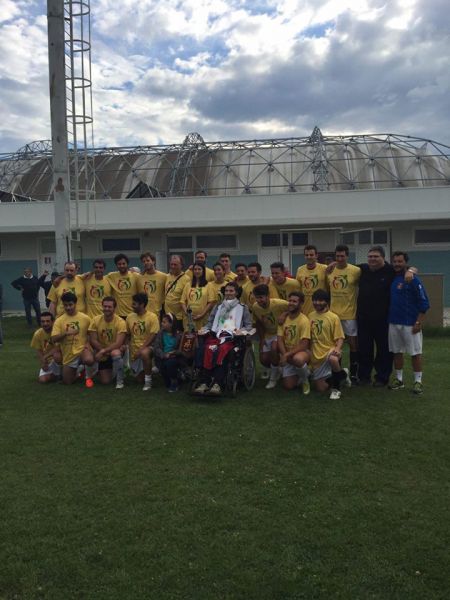 My name is Fabio, I’m 45 years old  and I live in Ravenna, Italy. I had early mobilization problems with my legs from 2009, in 2010 the diagnosis of ALS, in 2011 I stopped walking… In 2012 I lost the use of my hands, in 2013 I have been tracheostomised and I installed the PEG to feed me. In April 2013 I was no longer self-sufficient. I could only communicate with lip movement. At 42 I was totally unable to keep a relationship with the world, or talk to any person were not used to see me and do it. Even with those who were accustomed to do so, talks were brief and meaningless.

This until July 2013 when I received an eyetracking device and Intelligaze. Thanks to them I was able to start to do everything again like talking, choosing between different voices, surfing the internet, listening to the music, watching movies, reading books, using my TV, making purchases via online and using telegram for instant messaging. I can re-run the family administration through bank transfers, payments, utilities, internet banking.
I can interact with everyone, especially with my two little sons, Matteo and Francesco. Wonderful!!! At the beginning of 2015, since I was able to sit up in a wheelchair for three hours a day, I requested the installation of a support for the tablet attached to the wheelchair. Fantastic! And I feel even more secure since I can communicate with everyone and ask all that I want and need! For people like me, that despite ALS feel alive and want to do more, without being able to move and communicate, the eyetracking device and Intelligaze in particular, are the solution! Thank you Intelligaze for improving my quality of life! 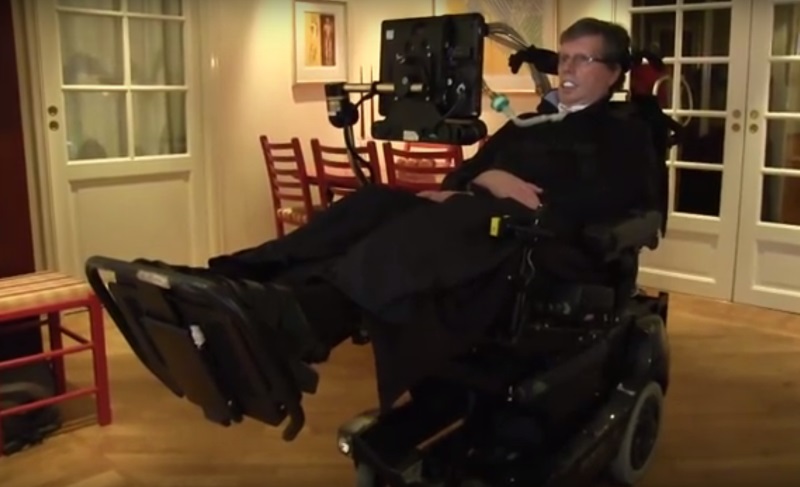 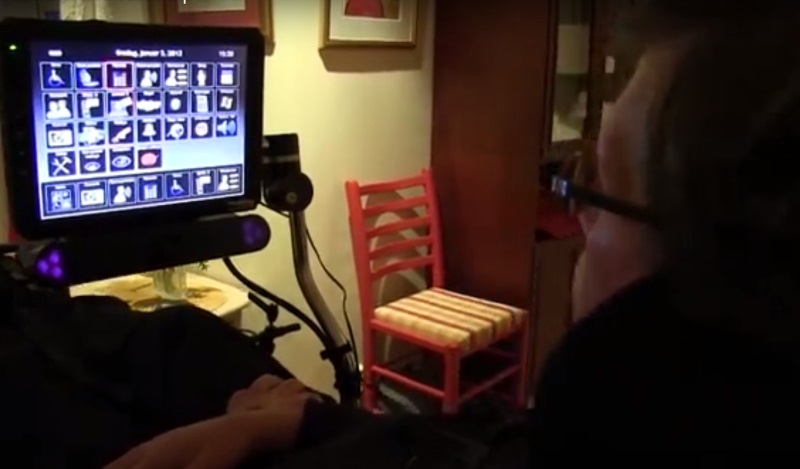 My Name is Julius Mowskvil. The reason I am in this wheelchair, is that I have motor neurone desease, or MND, which you may also know as amyotrophic lateral sclerosis, or Lou Gehrig's Disease. The reason I am here with you today, is that, despite my illness, I feel fine, and I'd like to tell you why. As you can see, I am almost totally paralyzed, I have no essential function in my arms or legs. I cannot talk, eat or even breathe, without assistance. The disease has taken full command of my life. Yet I can honestly say to you, I feel fine! Now let me tell you about the most important of those aids: Rolltalk. Rolltalk is a Windows-based computer which, on top of the usual PC functions, also helps me control my environment and communicate with others. Like me it's a unique Norwegian product. Rolltalk maneuvers my wheelchair, operates the telephone, controls all the functions in my house. It even lets me play with my grandchildren. Rolltalk gives me a voice, I can use email and I surf the internet without any problems. Life is my choice because the alternative simply isn't my style.

Our Alea Intelligaze set-up has been integral to creating our new ‘Clarion’ musical instrument, through participatory design with young disabled musicians and their teachers. We’ve been able to develop and test every aspect of Clarion with EyeGaze at the heart of the design process. We’ve used our Alea camera for presentations and training sessions where we focus on using Clarion with EyeGaze, and it’s also a useful back-up whenever our musician’s own EyeGaze set-ups are unavailable. Clarion is currently on limited release to musicians participating in Open School Orchestras and the South West Open Youth Orchestra, but we are making plans for wider availability in 2018.

Our website uses cookies to monitor how the site is used and provide you with information tailored to your individual preferences. If you continue to browse we will assume your permission to use cookies. About Cookies.